St. Peter has been a gateway and a gathering place for thousands of years.  Situated at the confluence of the big woods, tallgrass prairie, and Minnesota River, archaeological evidence tells us people have been coming together here for at least 9,000 years. When Euro-Americans first came to what is now Minnesota, they traded information, ideas, and goods at Traverse des Sioux — a shallow, rocky, river crossing located on what is now the City’s north end.  It was here in 1851 that the Dakota Nation sold about half of present-day Minnesota to the U.S. Government in the Treaty of Traverse des Sioux.

The City of St. Peter was founded by Captain William Dodd in 1853 on 150 acres north of today’s Broadway Avenue.  Originally known as Rock Bend, for a river bank formation nearby, the City was renamed in 1855 after the St. Peter Land Company was formed to promote it.  Though St. Peter failed in its bid to become the state capitol, five inhabitants were elected governor. The last, John A. Johnson, was the first governor born in the state, the first to be elected three times, the first to occupy the capitol building, and the first to die in office.  St. Peter continues to be a gateway and gathering place today with new students arriving at Gustavus each year and new residents from places around the globe. 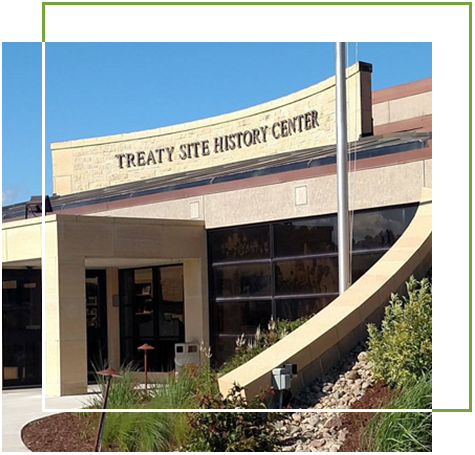 The Treaty Site History Center is the headquarters for the Nicollet County Historical Society.  Exhibits and walking trails interpret area history, including the Treat of Traverse des Sioux.  It was here in 1851 the Dakota Nation sold 24 million acres to the United States Government.

The Carpenter Gothic home was build in 1871 for E. St. Julien Cox, a Civil War veteran, attorney, state senator, district court judge, and St. Peter’s first mayor elected in 1865. Seven Cox children grew up in the house. Lillian became the first female mayor in Minnesota in 1921. Eugene played professional baseball and trained a dog that starred in Hollywood films. Daughter Irene became one of the first women to practice law in the state.

Open by Appointment only for group tours and facility rentals

The “Old Center” building houses a museum that is open to the public by appointment. The museum features a variety of treatment artifacts, furniture, and an archive of institutional photographs depicting small vignettes of hospital life and routines at the turn of the century.